It’s been nice to have a few days away from the pressures of the day job over the Easter period.

My wife and I got to spend some time in Wales and do a few of those things that we all like to do when we are away from home. We particularly enjoyed a little walking and driving around the beautiful hills and mountains.

This involves using a map of course, especially to navigate around some of the tiny mountain roads.

This was when, once again, what I suppose I could term the “dilemmas” of modern life, in similar ways to the the ways I see them affecting our Ham Radio hobby, rose up to start me thinking again…

Well, I picked up my brand new Ordnance Survey (The UK Mapping Agency) paper map of the area and found myself reminded of a great new feature, as advertised on the front cover… 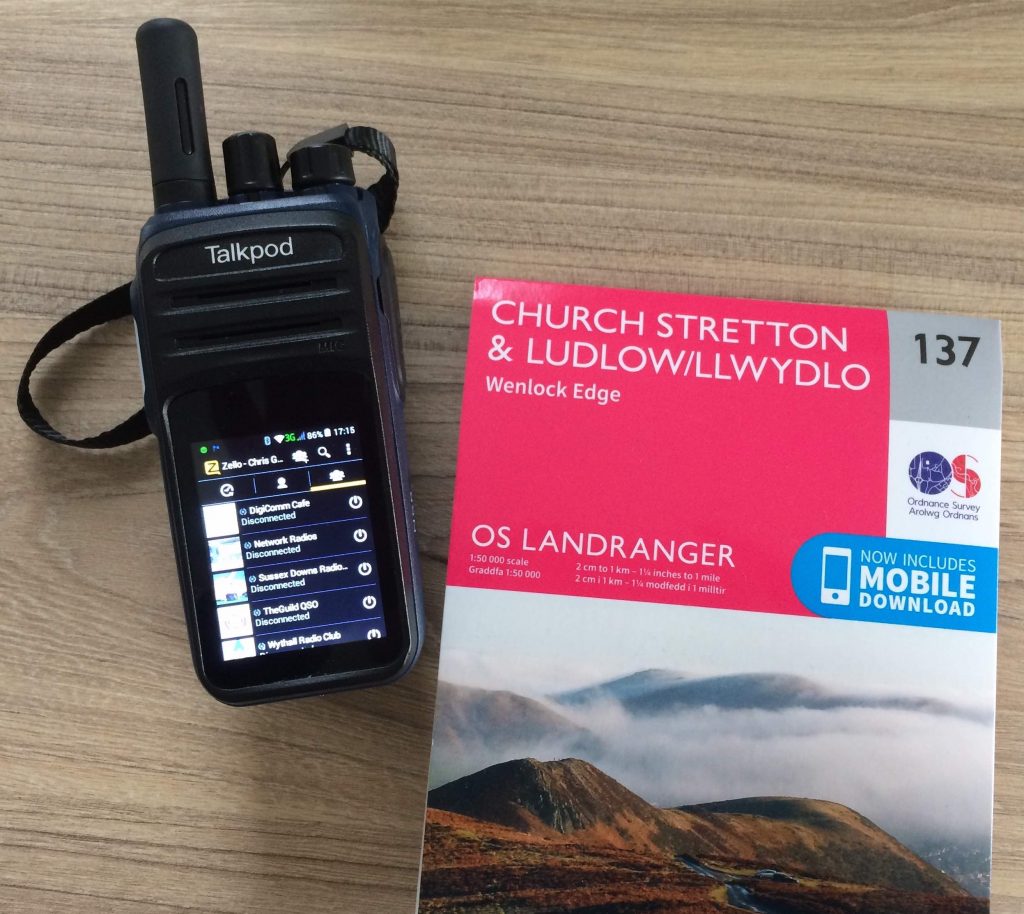 Ah yes, because I purchased the paper map, I qualified for a free mobile download of the paper map for my iPad & iPhone! Yay!

I’ve always been a “paper-map” kind of person, but I really like mapping applications on my personal computer devices, so I thought this would be a good thing – and so it was!

But by and large, the new addition was a very positive experience and led me to believe I would always want to be with both map versions when I was out and about in future, simply because the iPad version added something to an experience with which I was already very familiar.

Now what has this got to do with Network Radios?

It’s another example of how technology has created conundrums for our lives in the 21st Century. Network Radios, for me, are a bit like the online map – an adjunct that adds something to the overall experience, but can stand on its own too.

But I now love having my iPad map to hand too – just like I love using Network Radios as part of my radio pastime.

They both use new technology to enhance my hobbies.

But it HAS to be a paper map only, surely?

It would be silly to adhere to the view that, unless I always use a paper map, that I am not navigating “correctly”!

Equally, I don’t take the view that, if I am using RF, it absolutely HAS to be on a specific band for me to have fun using it.

Perhaps the problem lies with the fact that all these pastimes are exactly that, hobbies. Things that are intended to bring us pleasure.

Yes, some hobbies need licenses from official bodies in order to function; shooting, driving (definitely for certain types of vehicles), aviation and certain forms of radio.

But arguably the biggest thing that technology has done in the 21st Century is give us more choice about how to pursue our hobbies.

The online map does that for me when navigating, just as the Network Radio does for my radio hobby.

And this is quite possibly what our great Ham Radio hobby is struggling with.

What do you want your hobby to be?

That means we can still chase DX on 20m if we want to; we can take part in 48 hour contests if we want to; but we can also use IRN for social community-building via radio, rather like the recently-formed DigiCommCafé IRN group is attempting to do, again if we want to.

It’s not that one kind of Radio supersedes the other, it is that they complement each other, rather like the online map complements the paper one.

My local Radio Club has it’s own private Zello Group – only paid-up members can join it, but the rules that we have decided upon, are that we HAVE to use Ham protocols. It is moderated and to some degree controlled. You could say we are not only the users but the equivalent of the licensing authority! 🙂 It’s the way we want it to work.

Non-licensed members can have a “Club callsign”, which they use until they get their Ham call. They can practice using Ham Radio safely in an environment where they are among friends and can make mistakes without it affecting other Hams.

Yes it is closed, yes it is private, but we are having fun using aspects of Ham Radio in a different way – one that we want to use and works for us.

It is pretty darned popular too!

Extrapolating a little further, we don’t have to be quite so constrained by rules and regulations that were pertinent when the hobby came into existence.

But we can still have fun with these devices and increasingly many hams are doing.

Some use them simply end-to-end; others use them as part of a Ham-band to Internet link; some even use them to remotely control and PTT their remote HF transceivers.

Whichever way, Network Radios seem to be becoming a very useful tool for radio enthusiasts of all backgrounds.

It’s very easy to knock or diss them of course – but perhaps one should actually try such a device first, before you do so?

You might well be pleasantly surprised at the enhancement they can make to our great hobby.

4 thoughts on “Taking a break!”