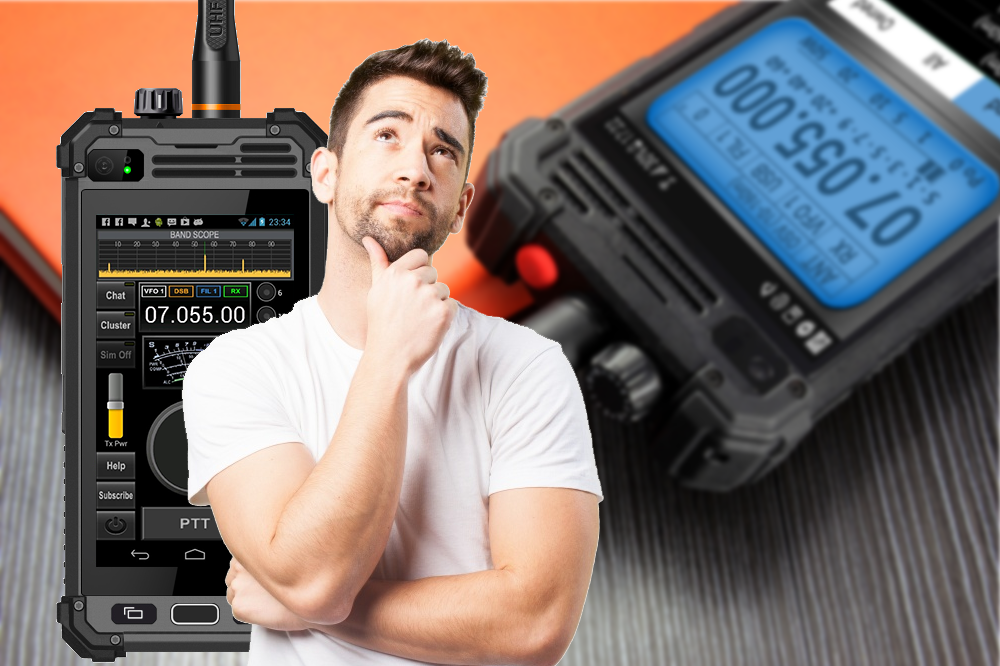 Earlier this year, I wrote a piece called “It’s not Real Ham Radio”.

It caused quite a stir and has since been disseminated worldwide, broadcasted and quoted in many places and in magazines too.

The basic premise was that, as new technologies come into the Amateur Radio Hobby, Hams often have difficulty adapting to them.

This should, in reality, not be a surprise. You will be able to think of many instances in your personal and work lives when change has come along, often unexpectedly.

The problem is that change is a little scary – and this is because it demands we react in some way.

3 ways we react to change

Oftentimes our reaction is to dismiss any change and try to remain in the status quo, where we feel we know our “ground” and where we feel secure. The problem here is that any changes then may pass us by – we can easily become mired in what quickly becomes “the past”.

Other times we are forced to take on board things we may not really want to. (Most times though, those things turn out to not be as bad as we had expected, just different.)

And very occasionally, we actually get all positive and embrace change and become quite excited about it.

Time to ask the question in a different way..

So, revisiting my initial article, I thought it was perhaps time to address the question, what actually IS “Real Ham Radio”?

Immediately however, I sense a problem here – you could probably get a different answer to this question from every single Ham in the world!

All these examples, and I could have gone on, are individual responses to the question “What is Ham Radio?”

What do you want Ham Radio to be?

To some degree, it seems obvious that “Real Ham Radio” is what you want it to be, what you make it for yourself.

Few hobbies have such a wide range to them, so many avenues to explore – I doubt that any one Amateur has ever managed to visit them all!

FT8, for example, is the latest digimode to appear on the scene and has been taking the Ham Community by storm it seems – although there are many, myself included, who don’t get a kick out of computer-typing modes.  I love to see my friends enthusiastic for it however, as it keeps the hobby alive.

So can we define “Real Ham Radio”?

Frankly it is a problem!

I had some lengthy correspondences with a few Hams after my initial article. We had to work hard to find common ground that would satisfy each other as to how to define our hobby.

I had one excellent thoughtful debate with a US Amateur during which we were both challenged to think of how we defined the hobby. We managed to agree for the purposes of our email exchange on something close to this…

“Ham Radio is a hobby where a government-approved license stipulates what we must do to comply with our license conditions. But this relates solely to the emission of RF – anything else involved in the hobby will clearly not require a licence.”

So we pretty much distilled the definition to purely TX-ing on an Amateur Band legal in the country that issues the license and nothing else.

But does that actually define Ham Radio?

I have a client who is a Lecturer at a local University. He is a Doctor and his specialism is Microwave Technology. He has his own research profile and also mentors undergraduates. Like me he holds a G7 callsign. Unlike me though, he has never ever been on the air.

Is he an Amateur? By our initial definition, the answer would be no, simply because he chooses not to transmit on specific portions of RF.

By the way, this man is, in actuality, a true RF “professional” – he is not an amateur (with a small a) when it comes to radio. He knows more than most people world-wide about radio, especially Microwaves.

Perhaps we can say “A Radio Ham is someone who holds a license to transmit on specific Amateur Bands, whether or not they choose to do so.”

There – that’s better. We can now count my client in our new definition.

That also covers another friend of mine who is a genius at construction and making transmitters from scratch. He gets his kicks from our hobby by constructing – but he doesn’t ever go on air.

He just tests his home-built radios on dummy loads and then usually gives them away to those in the hobby who enjoy the operating side. It would be churlish to say he wasn’t a “Real Radio Amateur”, even though technically, he didn’t even have to pass his exam to become a Ham for what he gets from the hobby.

So here is another issue – can you be a “Real Radio Amateur”, or engage in traditional Ham activities, and not even take a license exam?

This is getting more difficult – perhaps we can go back to the root word of “Amateur” – the Latin ‘amare’ – to love.

The difference between Amateurs and Professionals is that the former practices for love and the latter does it for a profession; in all likelihood they get paid for it.

After all, CB-ers are also lovers of radio. So are “Freebanders” and a lot of aviation enthusiasts.

In fact, a lot of other hobbies cross over to us in some way – model aircraft enthusiasts use RF in order for their hobby to work at all, for example.

So where are we to go?

We seem to be up a cul-de-sac with no way out.

So here we are and now Network Radios arrive on the scene and people are scratching their heads as to whether we “accept” them or not, as if we are some “guardians of real radio truth”!

I think the problem is that the technology is making it yet more difficult to define what our hobby actually is – and as newer and newer technologies come on stream, it may yet get even more so!

Perhaps we need to think “outside the box” a little more?

Network Radios certainly do not transmit on Ham Bands so wouldn’t fit into definition one.

However they could fit into definition two – you can use them like an Amateur would, if you choose to do so. If you choose to use Ham Protocols, fine, that is your prerogative.

They very much fit into definition 3 in the sense that we can make use of them in ways we see fit for our own “pleasure” and enjoyment.

A quick search for the definition of a hobby comes up with this – “an activity done regularly in one’s leisure time for pleasure”.

Well Network Radios fit that just fine too – and to boot, they also use RF at various points in the chain, albeit on cellular or wi-fi frequencies.

However, remember that they also can crossover into Ham bands via streaming audio or via remote operation of, for example, HF transceivers. This clearly would require an Amateur Service licence.

Bizarrely then, there is a sense in which Network Radios simultaneously may and may not require a license!

Isn’t this getting more than a little weird? That’s what technological conundrums do for you!

As I said at the start of this article though, change challenges us – it challenges the status quo.

Change has come many times in our hobby (this was the main point of my original article) and it is challenging us now in the persona of Network Radios.

Perhaps we need to broaden our definitions; in this way, we can encompass a lot more in our hobby and maybe even reach out to others and grow.

The alternative is to “batten down the hatches” and try to defend our own little corners of the hobby – ultimately, I think that road could conceivably lead us to extinction.

I like Seth Godin’s take on this… (if you have not heard of him, look up some of his TED talks)

He says, “Change is not a threat – it’s an opportunity. Survival is NOT the goal, transformative success is” (emphasis mine)

Paradoxically then, it is actually change that will ultimately drive the hobby forward.

Trying to just “survive” with only what we did in the past will mean we will shrink rather than grow.

Network Radios could well be part of these growth “opportunities” – isn’t it worth embracing them to see if they are?

What do any of us have to lose by doing so? Except maybe our fear of change?